Villa Repro Co., Ltd.
A 150-year-old old private house has been regenerated and used as a private lodging! You can stay in a historical building where the remains of guns attacked by the head of the Tokugawa clan, Kaizo Amano, who was active during the Meiji Restoration, can be seen in the chest of drawers!
-Efforts to contribute to regional revitalization and attract tourists by restoring old folk houses-

Villa Repro Co., Ltd. (Headquarters: Kawasaki City, Kanagawa Prefecture; Representative: Toru Haneda) produces a villa vacation rental “Amanotei (Owner: Akemi Amano)”, which is a renovated old private house, on the border of Tsuru City, Yamanashi Prefecture. opened on November 1st.
This villa is the home of Kaizo Amano, who was active as a local landlord during the Meiji Restoration. The building is owned by Mr. and Mrs. Yasuhiro Amano, descendants of Kaizo Amano.
Currently living in Tokyo, is it possible to make use of the main house, which was vacant? Consult with.
Mr. Haneda, the representative of Villa Repro Co., Ltd., who has worked on 14 vacation home vacation rentals and has already worked on 3 vacation home vacation rentals in Tsuru City, Yamanashi Prefecture, produced it as a vacation home vacation rental and made it an inn where you can experience the time of the Meiji Restoration.
Mr. Haneda, producer of vacation home vacation rentals, said, “It’s a historic building, and it’s a large mansion with 198 square meters on the first floor that can be rented out as vacation rentals. It’s a valuable inn where you can have an extraordinary experience that will make you feel like you’ve slipped back in time to the Meiji era. Moreover, if the building is left unattended, the damage will be severe.It is also an important mission to preserve the historic building by using it as a private lodging.”
In 2009, the “Kaizo Amano Exhibition” was held at Museum Tsuru, making it popular among locals.
In the 3rd year of Keio (1867), a group of Tokugawa forces escaped from Edo, and on the way to Suruga, they attacked Amano’s residence and extorted travel expenses. Even today, the marks left by the guns on the furniture of the Amano residence are still there.
Why don’t you experience the Meiji Restoration by staying at the Amano residence where you can feel the history from the end of the Edo period to the Meiji era?
[Web page] https://loghouse.life
[Image 1 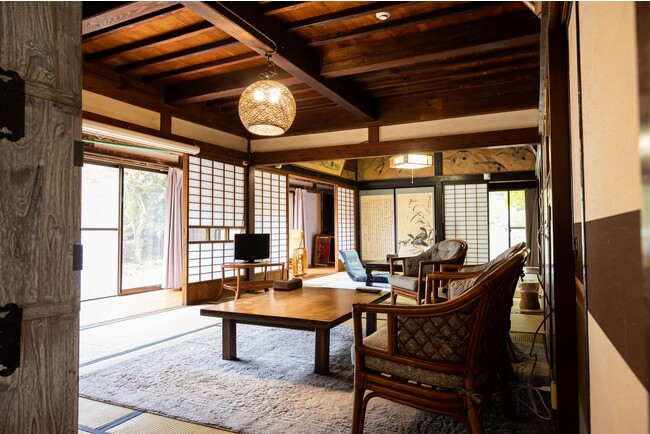 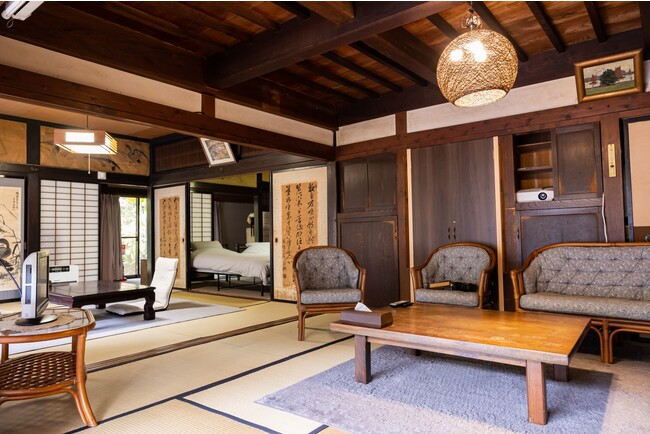 [Overview of Amano Residence]
Opening: Tuesday, November 1, 2022
Address: Yamanashi Prefecture Tsuru City Sakai 203 Amano Residence Homepage: https://loghouse.life
Accommodation reservation: https://airbnb.com/h/amano-tei
Who is Kaizo Amano, who was involved in the development of Odaiba? Kaizo Amano
Born in 1814 as the eldest son, he took over the family headship at the age of 19, being bold and unyielding from a young age. After passing through Gotemba, they expanded their reach to the Izu area and increased their power over the years. In August 1853, he was involved in the construction of Daiba (battery) in Shinagawa, etc., and completed the construction splendidly. He showed his patriotism by donating 3,000 ryo (about 200 million yen) to this project.
He also invested his own money to devote himself to social relief projects, and when Shimoda, Izu was hit by a huge tsunami due to the great earthquake in 1854, he provided supplies for this relief. In addition, he devoted himself to charity activities, such as paying national defense expenses and donating in the event of a disaster. In 1885, he became the mayor of Katsura Village.
In 1900, he passed away at the age of 87.
[Image 3 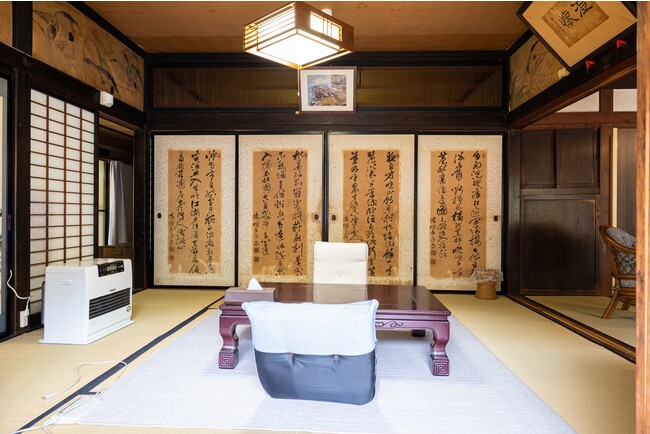 Nagomi no Sato Shutokukan
The building, which is located next to Bashotsukimachi-no-Yu, a hot spring in Tsuru City, was built by Kaizo Amano in the 20s of the Meiji era and was relocated from the site of Amano’s residence.
Tanedoku means “to give virtue to the world”. It is said that it was built for youth training for life.
At the end of the Pacific War, it was used as a place for temporary education for evacuated schoolchildren, and is still used as a facility for various hands-on experiences. Address: 1126 Tozawa, Tsuru City
[Image 4 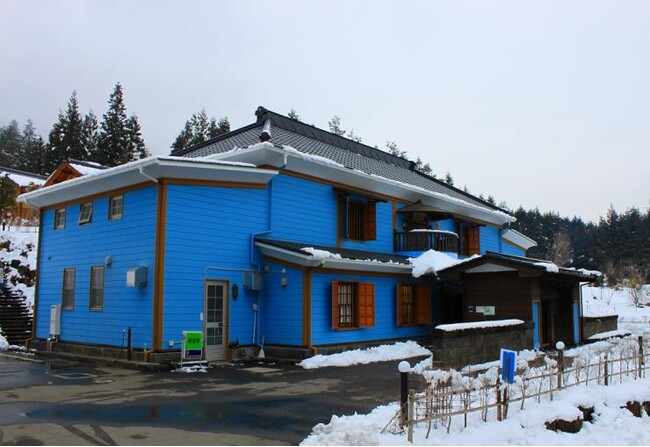 From the website of Nagomi no Sato Tanetokukan
Keio 3rd year attack by Shogunate
Aim for the Amano family, who was a wealthy man!
When the era changed from the Edo period to the Meiji era, the political situation changed rapidly, and we welcomed the so-called Meiji Restoration. At that time, the Amano family, which was the second wealthiest family in the county after Hoshinoya, was a wealthy family. I am facing the misfortune of being killed.
On the way to Suruga after fleeing Edo, he attacked the Amano family and forced them to pay for their travel expenses. The marks left by a gun at that time are still left on the chest of drawers of the Amano residence.
[Image 5 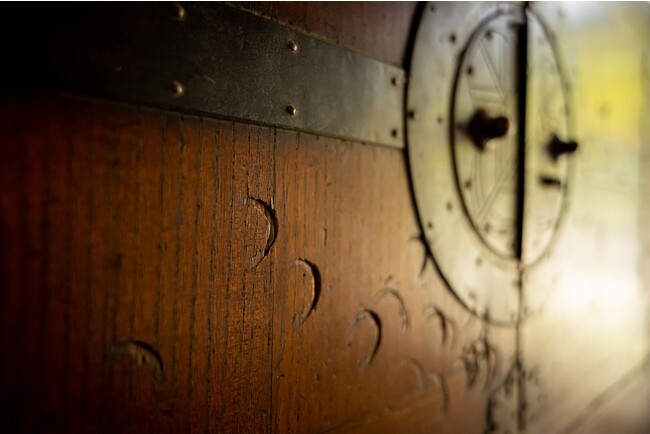 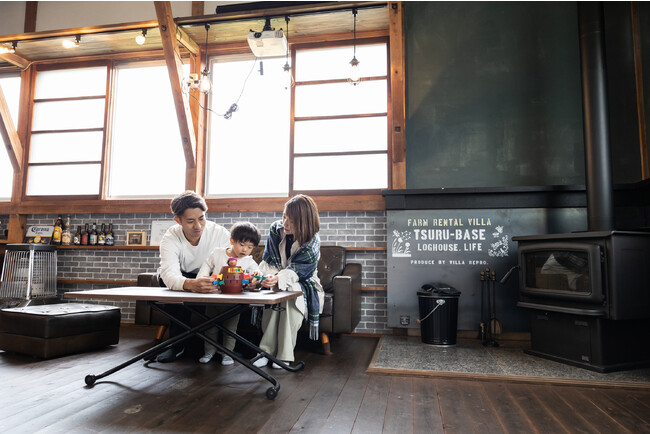 One thought on “Villa Repro Co., Ltd. Renovate a 150-year-old old house and use it as a private lodging! You can stay in a historical building where the remains of guns attacked by the head of the Tokugawa clan, Kaizo Amano, who was active during the Meiji Restora”